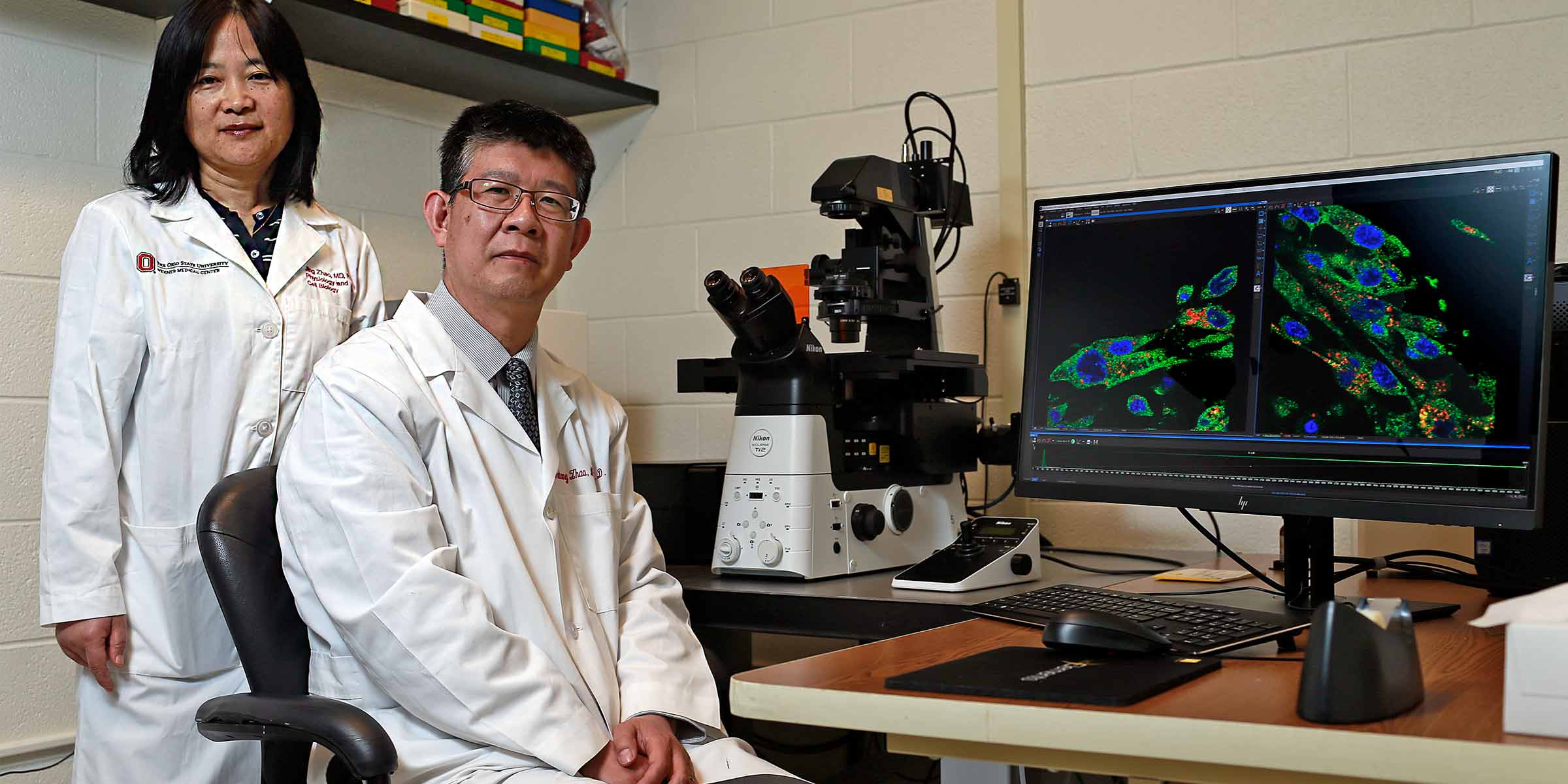 Frank Benson says there’s little he won’t do to fight the incurable lung disease that afflicted his father and him.

“I’ll do whatever it takes. I’ll go around the world if I have to,” says the New Albany resident, 67.

Thanks to Frank and his wife, Jewel, he doesn’t have to go far to find hope in his fight.

The Bensons made a generous gift to The Ohio State University Wexner Medical Center, where Frank is being treated for idiopathic pulmonary fibrosis (IPF), a chronic disease that destroys lung function. About 5 million people worldwide suffer from IPF, and a patient generally survives about four years after diagnosis. Most patients are older than 60 when diagnosed, and research of the disease has historically lagged those such as cancer and HIV, which affect younger patients.

But now, some of the leading research into the disease is being done at Ohio State, largely thanks to the Bensons.

Lung researchers Yutong Zhao, MD, PhD, and Jing Zhao, MD, PhD, joined the faculty at The Ohio State University College of Medicine in 2018 and have established a lab to study the causes of IPF. Both were recruited to Columbus from the University of Pittsburgh Medical Center, a leader in lung disease research.

The researchers say that part of what appealed to them about working at Ohio State is the strong, collaborative relationships among units within the academic medical center.

They’re examples of how Ohio State has added to its base of talented faculty. More than 200 faculty members have joined in the past year, including top doctors and researchers from Johns Hopkins University, Washington University in St. Louis and Stanford University. The College of Medicine plans to add 500 more faculty members in the next five years.

The Jewel and Frank Benson Family Idiopathic Pulmonary Fibrosis Research Fund helped bring the Zhaos to The Ohio State University Dorothy M. Davis Heart and Lung Research Institute,but it also has helped give them state-of-the-art equipment to study IPF. In 2019, the Zhao lab added a powerful new Nikon microscope, which allows the researchers to see lung tissue samples at the molecular level, helping shed light on what causes the misfolded proteins that can trigger pulmonary fibrosis.

It's a big step toward providing hope to patients like Frank, who had a lung transplant in 2019. James Allen, MD, is a pulmonologist at The Ohio State University Wexner Medical Center who treated both Frank and his father. A conversation with him helped plant the seed that led to the Bensons’ action.

"Dr. Allen told us that research for lung disorders, particularly toward IPF, is 20 years behind heart and cancer. The numbers are staggering. That woke Jewel and I up," Frank says.

The implications of that wakeup call could be profound.